4 Essential Keys To Leadership Success In The “New Normal” 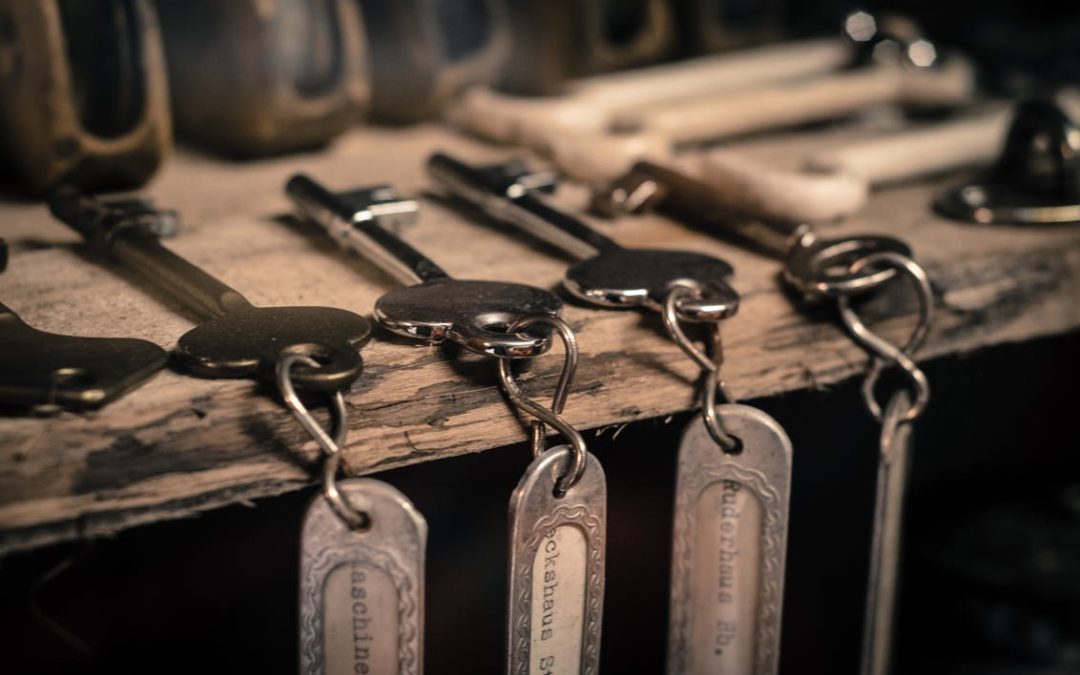 How can you be a powerful leadership influence in the coming months, post-lockdown?

These four keys are fascinatingly powerful to help you lead, particularly whilst navigating COVID-19 with your teams.

They help unlock your leadership potential, whether you’ve been leading for decades, or are new to leadership.

KEY 1 – UNDERSTAND THE ESSENCE OF LEADERSHIP

Many people misunderstand leadership, which prevents them from leading effectively.

A clear understanding of the essence of leadership unlocks the necessary power of leadership amidst the complexities that COVID-19 has brought.

Leadership is often described by factors like leading by example, creating a vision, providing motivation or communicating charismatically.

When asked what leadership is, people often mention slogans like a leader is one who: “knows the way, shows the way and goes the way”; “walks the talk”; or “inspires others to action”.

Whilst these slogans highlight the result of leadership or specific actions of a leader, they do little to speak to the essence of what it is to lead. The more slogans we have describing leadership in unclear terms, the less likely it is that we will understand it.

Sure, leadership is difficult to define. But ultimately, if it means everything and anything, it eventually means nothing.

John Maxwell, in his book Becoming a person of influence, describes a leader as a person who is able to influence. 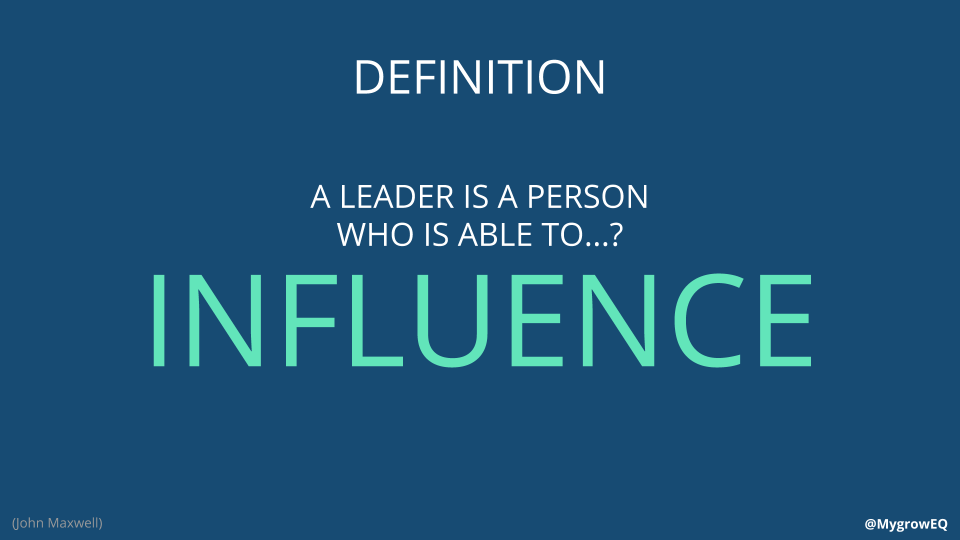 To speak about leadership as ‘influence’ makes it rather interesting.

This definition moves away from thinking of leadership as a set of criteria, or personality characteristics, and instead explores what leadership IS.

Consider, for a moment, that the Latin word influentem (flowing in) is the root of the French word influence, which, in the old days, described power as flowing from the stars.

Influence, then, means the coming together of, or to flow.

If leadership is about influence it means to flow inside of somebody. It speaks to leaders’ ability to flow into people and to, essentially, impact them from the inside out.

MOVING FROM HERE TO THERE

A second concept essential to understanding leadership is the idea of moving people from here to there.

It’s important because influence isn’t to do with things, but people.

From this perspective, the term ‘leadership’ means to flow into people galvanising them to shift from here to there (from a current state to a different future state). 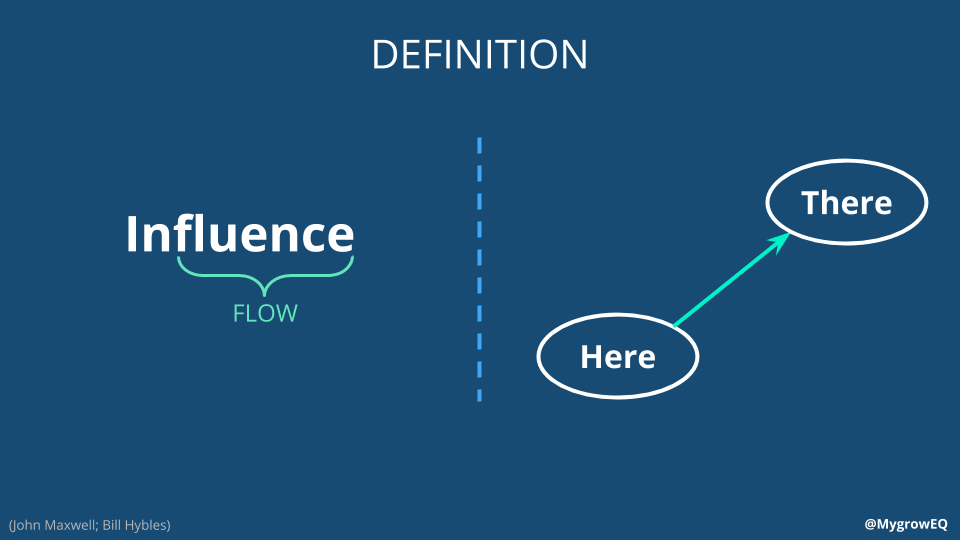 Understanding the essential influencing process of moving people from here to there is a key to unlocking powerful aspects of leadership in the current moment.

KEY 2 – KNOW THE DIFFERENCE BETWEEN MANAGING AND LEADING

Some people’s leadership is undermined because they confuse the roles of managing and leading.

This confusion causes many potentially great leaders to flounder.

In the history of both organisational psychology and management science, the concepts of management and leadership have often been used synonymously.

This is a fundamental problem with the idea of management – that managers are automatically regarded as leaders.

Most of us can give examples of someone in a senior position with little influence over people in the organisation. There are probably others in this manager’s team who have more influence than they have. Sometimes more influence, even, than the CEO.

A closer examination of the difference between managing and leading clearly highlights that being a manager does not mean you have influence.

Managing and leading have a fundamentally different mindset, focus and ultimately each function answers a different question. 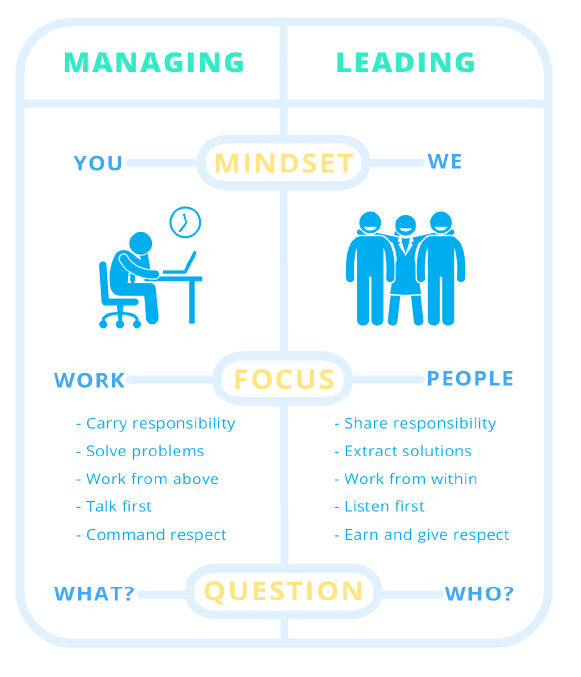 This is your job, you are responsible. Your role has to do with telling how it needs to be. The buck stops with you. You’re probably responsible for a given department, and a departmental budget. You typically solve problems, talk first – you have the bigger picture of the business, after all – sit in on more senior meetings, and command certain respect (irrespective of organisational culture). The focus is on the work and what needs to be done.

It’s unsurprising that managing can happen from a distance, removed from the people in the team. You can ‘manage’ from a head office, a laptop, or a spreadsheet.

Because the key to management is WHAT needs to be done.

As a leader you focus on “we” – we are in this together; we need to achieve this; we are part of this team; what are we going to do? Language becomes collaborative; the mindset communal. You invite input to extract solutions. You work from within the team. You listen first and then give input. You earn and give respect.

The focus here is on people. And the fundamental question is WHO is with me in this?

Leadership, then, is radically different from managing.

It’s about flowing into people to take them from here to there, not controlling or administering what they do.

KEY 3 – LIVE FROM THE PARADIGM OF SERVANT LEADERSHIP

Some leaders are fundamentally restricted by thinking that their team is there to serve them, their needs, their department, or their objectives.

Unfortunately, these leaders will remain stunted until they adopt the servant paradigm. Fundamentally, the most effective leaders serve their people.

Enter your email below to be notified of new content!

It is only in the last 50 years that the concept of servant leadership has emerged as a leadership paradigm, although the concept of how one can influence by being a servant has been in evidence across millennia.

Central to this approach to leadership is that you esteem the people with whom you work; that you have a high regard for them.

You put your team first, and yourself second. You consider their needs before your own. Their growth and wellbeing are your priority.

This approach places people ahead of power.

In fact, it leverages power FOR people.

The servant leadership philosophy and practice has had numerous well-known advocates, including Stephen Covey, M Scott Peck, Ken Blanchard, Ann McGee-Cooper and Margaret Wheatley, among others.

The term was coined by Robert Greenleaf in his 1970 essay, The Servant as a Leader, from which this quote is drawn:

“The servant-leader is servant first… It begins with the natural feeling that one wants to serve, to serve first. Then conscious choice brings one to aspire to lead. That person is sharply different from one who is leader first, perhaps because of the need to assuage an unusual power drive or to acquire material possessions…”

The direct result of this style of leadership is engagement, innovation, trust and strong relationships between team members.

If you are not moving towards behaving as a servant leader then you are severely limiting the scope of influence you can have.

The worst part is you may not even be aware of just how much more you could achieve if you pursued servant-leadership.

Robert Greenleaf gives a couple of questions that function as a type of ‘litmus test’ for whether or not you’re succeeding as a servant leader.

He suggests that you can observe servant leadership capability by asking:

1) Do those you serve grow as people?
2) Do they become healthier, wiser, freer, more autonomous, and more likely themselves to become leaders? 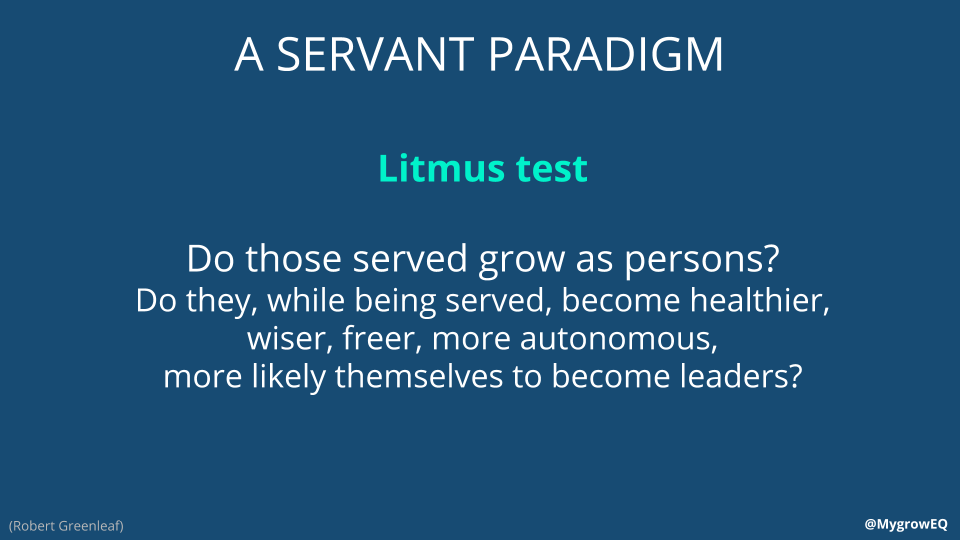 Fundamentally, are your people growing and flourishing around you? That is the test of your leadership ability in this paradigm.

Ken Blanchard, author of The One-Minute Manager has this to say about leadership:

“Leadership is a case of making goals clear, and then rolling up your sleeves and doing whatever it takes to help your people win. In this situation, they don’t work for you, you work for them.”

Living from a paradigm of servant leadership unleashes aspects of influence that are unachievable without it. Results, although not necessarily immediate, over the long term have the potential to unlock teams’ full potential.

And for any leader to influence at their highest potential, this key of servant leadership is paramount.

KEY 4 – BUILD THE MUSCLES OF LEADERSHIP

Athletes improve by strengthening the muscles needed to perform their discipline. The same is true of leadership.

Developing the muscles needed to influence others is a vital key to effective leadership – now more than ever.

According to Daniel Goleman 85% of the muscles, or competencies, needed for effective leadership lie in the domain of Emotional Intelligence (EQ).

EQ is a comprehensive set of skills that make people great at managing themselves and interacting with others.

These skills, or competencies, when developed, empower almost every aspect of leadership capability. Making EQ by far the most significant contributor to your success. 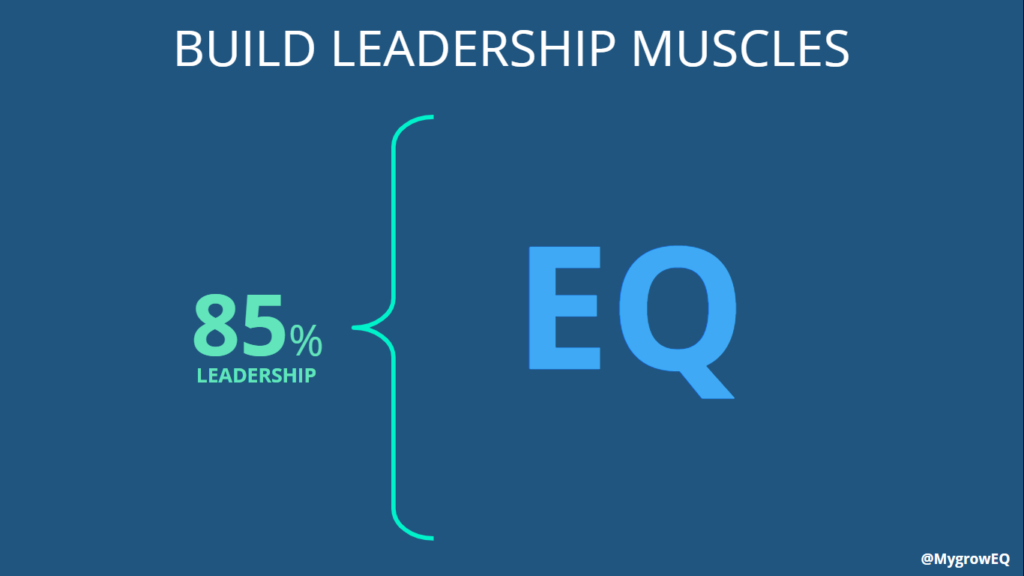 Refining and developing EQ as a leader is like a fairly good rugby player working on the one set of muscles contributing to 85% of his effectiveness on the field.

It would stand to reason that this critical area is where he would focus his time.

To strengthen your role as a leader, developing your emotional intelligence is a prerequisite.

One develops EQ through a series of specific techniques performed over time, in very much the same way as you develop physical muscles.


The muscles EQ develops and refines over time: 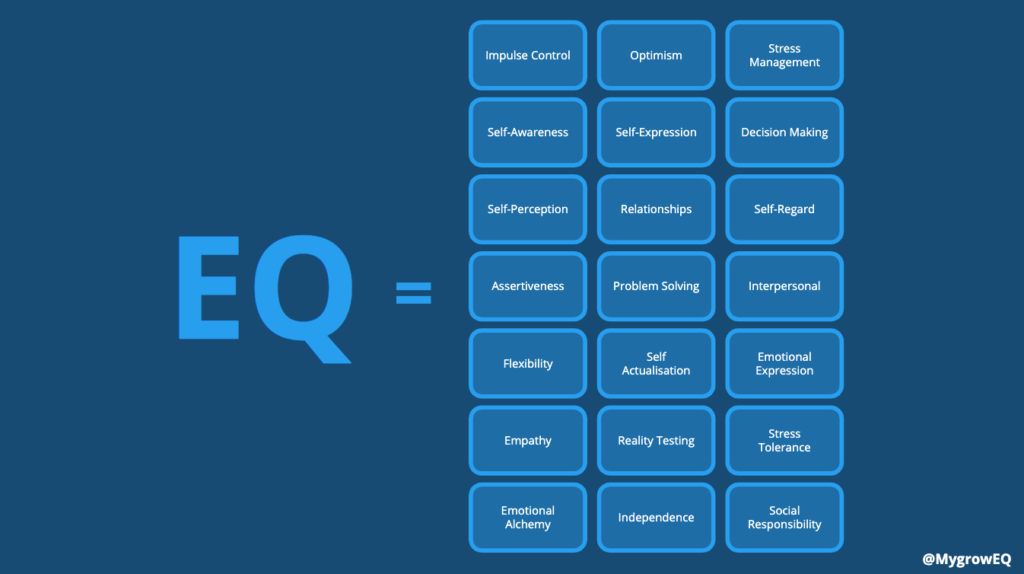 In the same way as a systematic fitness plan hones the skills of an athlete, an EQ regime refines and develops strong leadership capabilities.

To access these techniques and begin honing your leadership skills, one of your options is to sign up to Mygrow’s EQ platform (you can access a free 14-day trial here).

Designed to increase EQ over time, your daily commitment is short sessions of just 15 minutes.

If EQ was important before COVID-19, it is now a critical key to unlocking the potential so desperately needed by business as it fights to sustain itself.

Reason suggests that those leaders successfully navigating the dynamic of the virus’s “new normal” are those with the critical abilities of high EQ.

These four essential keys of leadership work together to unlock the necessary power of leadership potential, providing a powerful framework to boost your leadership effectiveness.

Choosing to use these leadership keys primes you to resolutely navigate this time.

Understanding the essence of leadership, knowing the difference between managing and leading, whilst living from the paradigm of servant leadership and building your EQ, strongly facilitates your flowing into the people in your teams, inspiring them to move from here to there.

Why wouldn’t you lead in a way that empowers both you and your teams?

Now more than ever.

Thank you… I have found this helpful. I especially like the litmus test.