Top 3 emotional moments from Tokyo 2020, and what they say about us 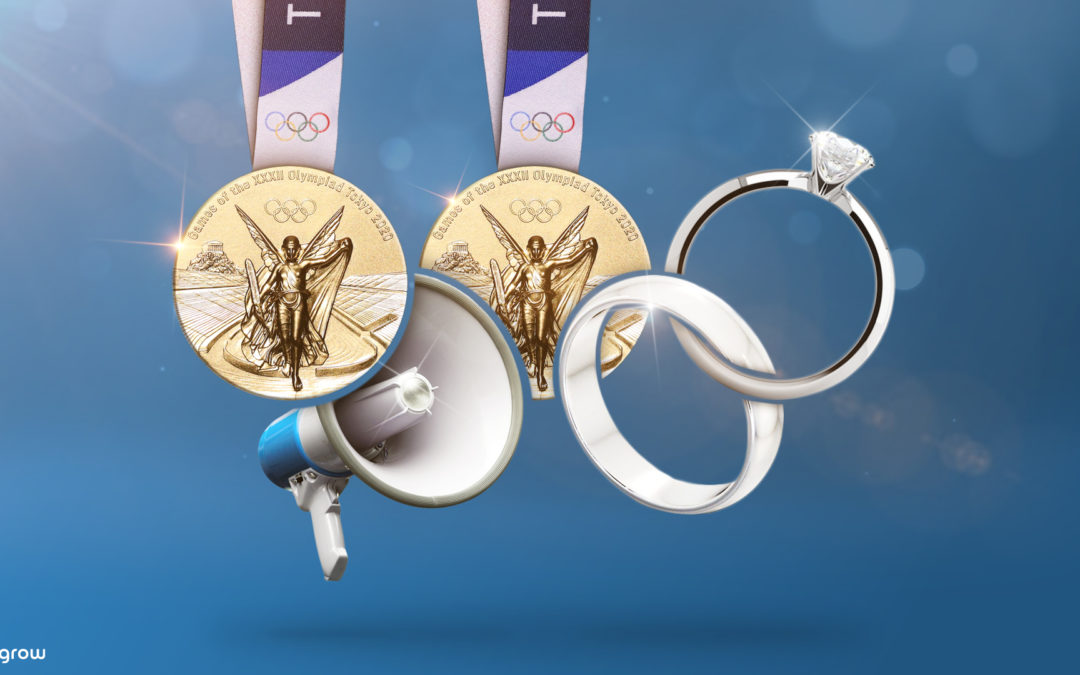 Now that the games are over I am reflecting on the top three emotional moments from Tokyo 2020. I have some questions and musings about three of them in particular.
Firstly, if you don’t succeed, should you keep trying?
Also, when is a bronze medal the second time around, better than it was the first?
And finally, and this one fascinates me most, how do you spin Silver into Gold?
These highlights say so much about the character and emotional intelligence of the individuals involved. But they also say a lot about our capacity to connect with one another, persevere, be resilient, and in essence, be more human.

The theme for the Tokyo 2020 games was “United by Emotion” and they delivered on that promise. To quote the official Olympic release: “The motto emphasises the power of sport to bring together people from diverse backgrounds to connect and celebrate in a way that reaches beyond their differences….This is precisely the power of sport – its ability to connect people through their emotions.” 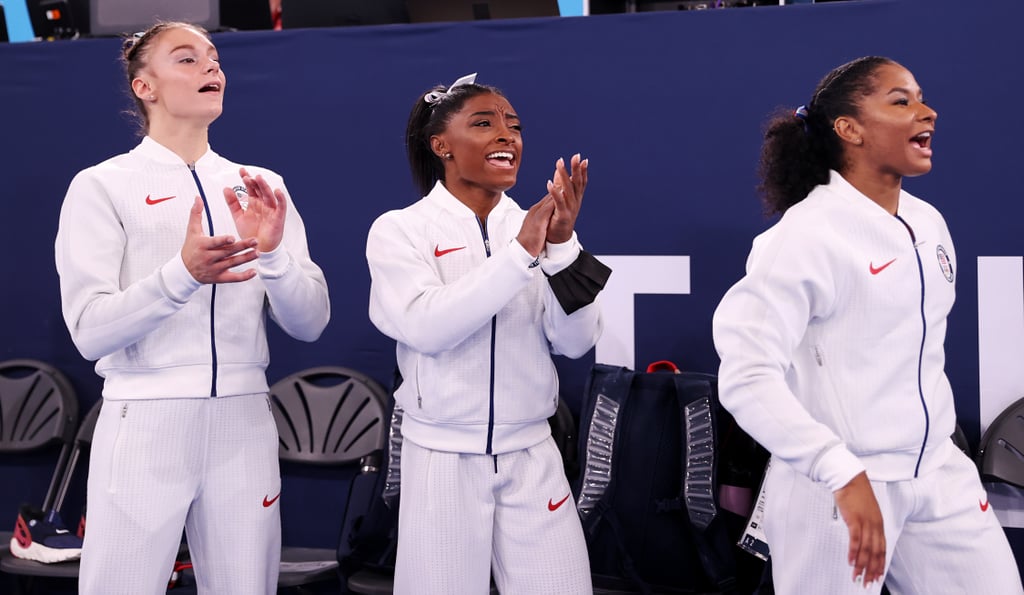 For years we have heard: “Sport is the international language.”
Maybe… But I think it’s not sport, but emotion that can unify and divide us. It’s the one thing we all understand. I don’t know about you, but these Olympic Games seemed to generate more emotion than I have ever seen before. It makes sense, it’s a difficult world at the moment – we are highly strung, fatigued from the ravages of a global pandemic and its subsequent repercussions.

So, here are my highlights, and what each of them can teach us.

If you don’t succeed at first, should you keep trying?

Lucas Saucedo. What a champion. He didn’t win a medal in these Olympics, and in fact, he didn’t even compete. But no one will dispute that he takes home a priceless win from these games. Lucas coaches the Argentinian fencer María Belén Pérez Maurice, who has been in love with her for years. She lost her final game to Anna Marton, who went on to claim bronze, but Lucas decided to propose to her while doing a media interview after her final game. The surprise and joy was palpable, and you can’t help but smile and laugh while watching it unfold.”The media interview continued amidst the couple’s joyful laughter for about ten minutes. 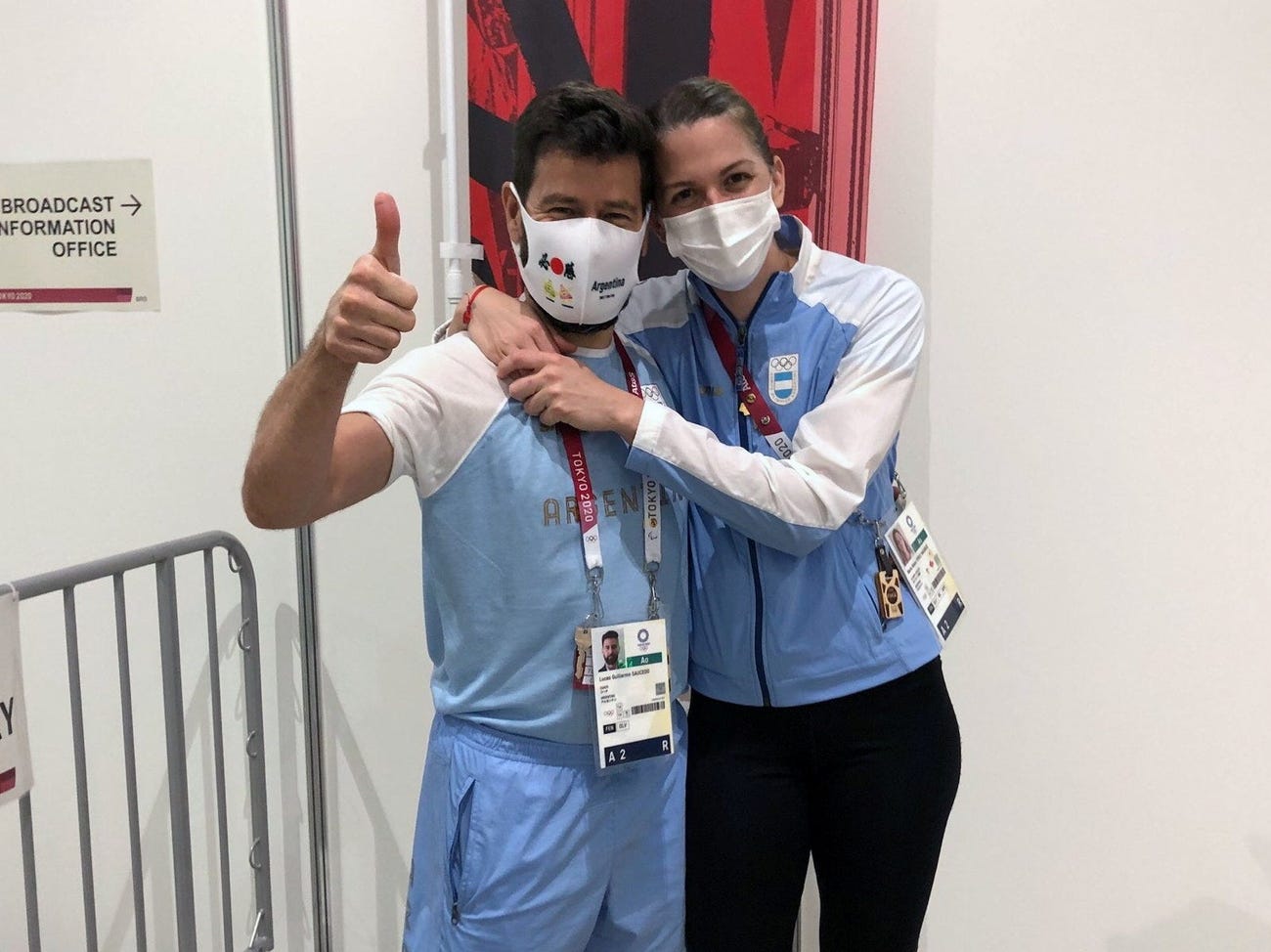 It’s not the first time he tried to win this particular prize. In fact, he asked her to marry him the first time 11 years ago. She turned him down – then, but perhaps it wasn’t his time.
Lucas showed some serious emotional skills through his dedication and patience to achieve what was important in his life. What legend!
So, if you don’t succeed at first, should you keep trying? Yes. But it’ll take some work….
So what’s important to you? And how are you going to get there?

When is a bronze medal the second time around, better than it was the first?

Simone Biles has been in the news a lot, this Olympics. But not for the reasons she has been in the past. In these games, she only got one medal. A bronze. We all know the story.
In her press interview, she said she had the “twisities.” It’s when a gymnast loses air awareness and can’t figure out where they are, in relation to the ground. It’s pretty dangerous, you could really hurt yourself if you try to push through it. She went on to say that she was experiencing a lot of pressure at these games, feeling the need to perform, and it had taken its toll – mentally

Instead of pushing through to save face, she used her public profile and platform to not only speak out about mental health, but to take action by sitting out most of the events she was scheduled to take part in, to take care of her own mental health. This comes after tennis player, Naomi Osaka opened up this conversation in sport earlier this year. There have been some haters, but for the most part, Simone has been praised for her courage and leadership in this important conversation. 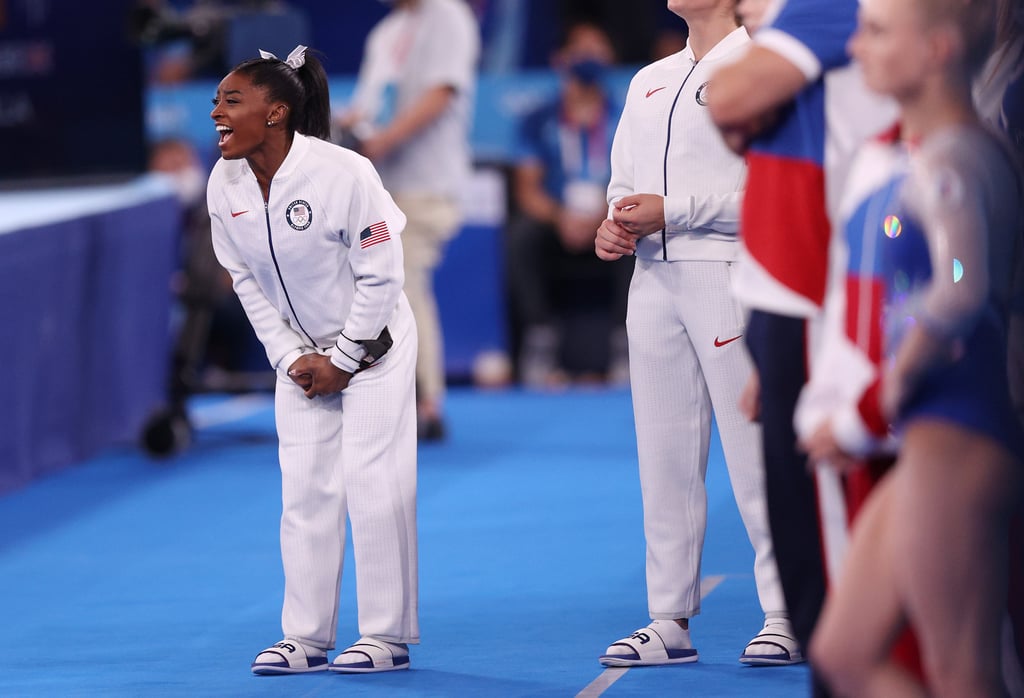 But that’s not what I want to talk about here. I want us to recognise how high the stakes of these Olympics were for her. She is probably the best female gymnast of all time. Coming into these games, with six Olympic medals already to her name, she was one medal shy of the all-time Olympic gymnastics medal record of seven. On top of that, and perhaps more impressive, she was also one medal short of the world record for championship medals, with thirty one. She came back and did one event. Beam. That one event meant only one more medal and missing out on both of the two prestigious titles she was poised to receive.
What’s more, she had already won the bronze for this event in the Rio Olympics in 2016. So this was hardly a victory.

With this bronze medal she equalised the Olympic and world record for the number of championship medals won. In these games, she could have taken both of those titles outright? But speaking of her bronze medal, she said it was the medal she was most proud to have achieved. Why? Why is this bronze medal a victory for her? Well, she said this bronze medal for beam was her most meaningful one, as she felt it symbolized her focus on mental health.
This response is a symbol of her taking a loudhailer and adding to the conversation around mental health which we know isn’t only important in Sport, but also in the workplace, in the home, while you’re working remotely. She used her platform to bring awareness. 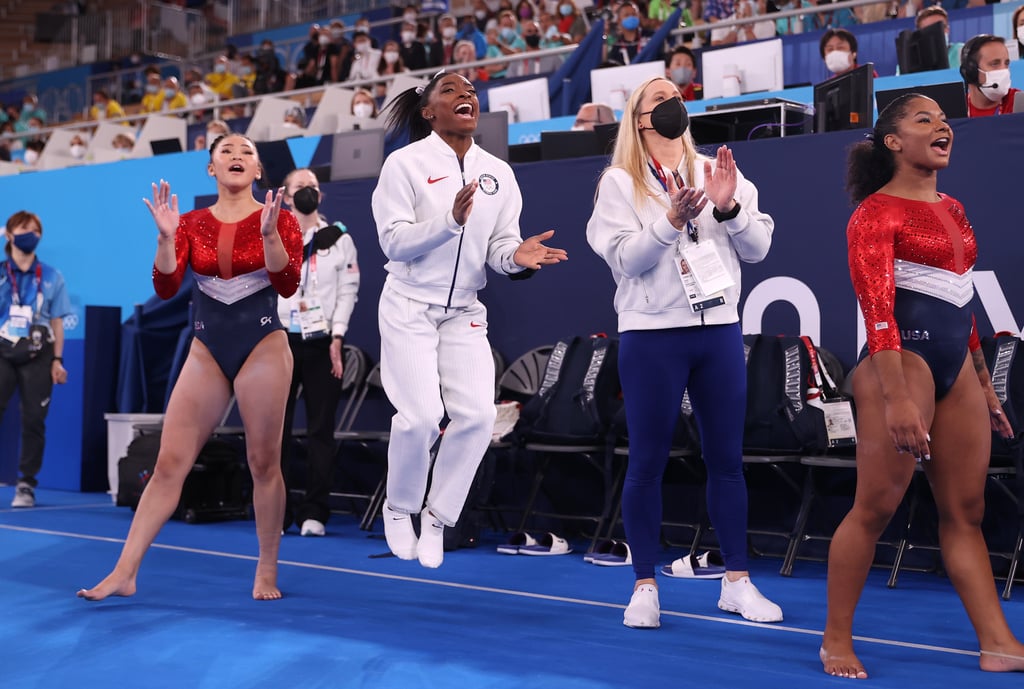 What takes this to the next level for me is the fact that even while knowing she had lost the opportunity to become the undisputed “best gymnast of all time,” she didn’t let the weight of her experience close her down. She didn’t slink off to the change rooms to lick her wounds. She didn’t let her pain steal from her teammates. No, instead she chose to take that same metaphorical megaphone, and cheer her heart out in support of her team. She was on the sidelines but refused to let her experience sideline her voice, quite literally. She remained present and supported them after she withdrew, as seen in countless photographs of her passionately cheering them on.

Taylor swift was so stoked, this is what she tweeted, specifically referring to Simone Biles “… this week was a lesson in emotional intelligence and resilience. We all learned from you. Thank you”
So, when is a bronze medal the second time around, more meaningful than the first? When you have conquered something else even greater, and proven your worth in who you are as a person.

How do you spin silver into gold?

The men’s High jump final with Mutaz Essa Barshim (from Qatar) and Gianmarco Tamberi (from Italy) will go down as one of the most impressive of all time.

This particular final went on for more than 2 hours.
Now, it must be stated that both of these men know what it’s like to claw their way back.
In 2016 Tamberi had a serious injury to his Achilles tendon, just weeks before the Rio Olympics. And Barshim, the reigning world champion, had a serious accident two years ago. So, after 2 hours of gruelling competition, the only two contenders left on the field were both stuck having reached 2m:37, unable to achieve the next height after three failed attempts. They were officially tied. The Olympics officials gave them an opportunity to do a jump-off to determine the outright winner, but in an unexpected move, Barshim asked if they could have two golds. If you’ve seen the footage I’m sure it was hard to watch without tearing up. I’ve watched it many times and to quote Travis Scott, “I get those goosebumps every time.”

For me, this story reminds me of the best we can be.
These two competitors were friends before the games. They trained together, they had a shared story, they understood how hard things can be, working hard to overcome injury. They know the pressure when you’re competing at this level in Sport. But now they are friends for life, they have something so much more than they would have had if they had insisted on victory alone. 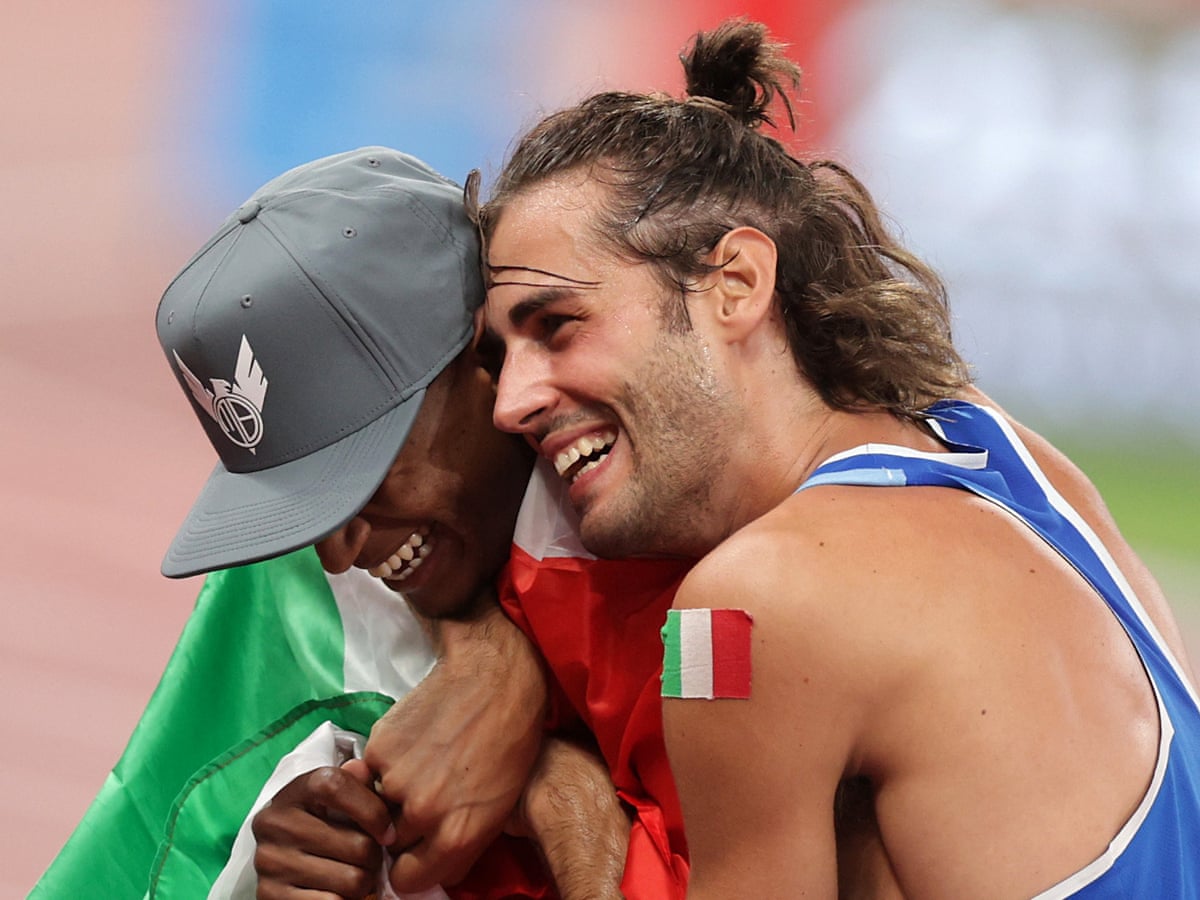 And, this is also the only medal ceremony I saw where the athletes didn’t award themselves but chose to place the medals around each other’s necks instead. Even the celebration was an act of serving the other.

The event ended with two golds and a bronze. No silver medal was awarded.
So, how do you spin silver into gold? With hard work, generosity, large-heartedness, grit, resilience, stress tolerance, optimism and empathy.

The games are over but the challenges we face globally, and personally, aren’t. And we have a long way to go. What can we learn from these three stories? What do they say about us as humans? Well, I think we can learn that we are all in this together. We have the capacity to feel each other’s pain and celebrate together. We can all find joy in defeat. We can think of the other, even in our own sorrow. We can speak out for ourselves and each other. We can share our victories. That’s the kind of world I want to live in. It’s the kind of world I want to contribute to.
Let’s build an even more emotionally intelligent world, together.

Mygrow helps you to develop the skills you need to build a more emotionally intelligent world. It does this by methodically building Emotional Intelligence using daily online 10-minute sessions. These sessions involve the techniques that rewire neural pathways in the emotional centres of the brain over time, helping you interact with your world in new and positive ways.